Day 5 became a very rainy day. It stopped at about 17. Too wet to go out for me. Than later that evening I found a house very suitable for the theme. But I had left my memory card for the camera at home. Suterday was very very warm so I stayed in the shadow almost the whole day. A few promenads made it however evident that the house I’ve seen friday evening was not a good example of the theme. On sunday I found something not far from where I live. I were all the time thinking of an old abandoned house for the theme.Someone built this house and now it is totaly abandoned, only they who are dead and buried stayed
My contribution is however a quite simple association, but I’m no god at finding sofisticated associations. I’ve seen some very god interpretations of Solitude among other contributions, so I learn a bit from them. 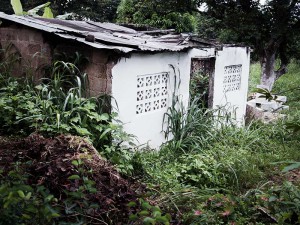